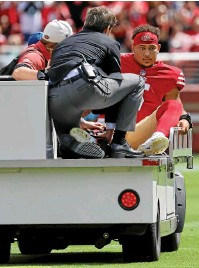 SANTA CLARA, Calif. — San Francisco 49ers quarterback Trey Lance will miss the rest of the season after breaking his right ankle Sunday. Lance went down after running the ball on the second drive of a 27-7 win over the Seattle Seahawks. A cart came out on the field and Lance’s leg was put into an air cast before he was taken off. The 49ers immediately announced he would not return. Lance’s teammates and several Seahawks players paid him respect before he left the field. San Francisco coach Kyle Shanahan announced Lance’s prognosis immediately after the game. Lance took over the starting job this season from Jimmy Garoppolo after being drafted third overall in 2021. San Francisco traded three first-round picks to move up nine spots to take Lance, making a major investment in him. Lance spent his rookie season mostly on the bench watching Garoppolo as the Niners went all the way to the NFC title game. ‘NFL Sunday Ticket’ outages anger fans DirecTV’s “NFL Sunday Ticket” package malfunctioned for the second straight week, causing fans trying to watch through the app or online to miss entire games. DirecTV said via social media that customers trying to stream the early afternoon games were unable to through the app. Shortly after the start of the second slate of games, they said that the server problems were fixed and that streaming could resume. That came too little, too late for those trying to view the seven early games. The outages did not affect customers watching via normal satellite service. This is the final season that DirecTV will be the exclusive carrier of “Sunday Ticket.” Amazon and Apple are among the bidders for the package of out-of-market games after commissioner Roger Goodell said during the summer that he expected a new carrier. BRIEFLY RAVENS: Lamar Jackson became the first quarterback in NFL history with both a touchdown pass and a touchdown run of at least 75 yards in the same game on Sunday. He also rushed for over 100 yards for the 11th time in his career, breaking a tie with Michael Vick for QBs with the most 100 rushing-yard games. LIONS: Amon-Ra St. Brown had nine receptions for 116 yards with two touchdowns on Sunday to become the first player in league history to have six straight games with at least eight catches and a score. The second-year pro tied an NFL record with eight-plus catches in eight consecutive games .... Aidan Hutchinson, the No. 2 pick overall in the 2022 draft, joined Julius Peppers (2002) and Chip Banks (1982) as top-10 selections to have three sacks within the first two games of their career. DUST-UP: Buccaneers receiver Mike Evans and Saints cornerback Marshon Lattimore both were ejected for their involvement in a several-player, after-the-whistle scrap in the fourth quarter of Sunday’s meeting in the Superdome. This marked the second time since 2017 that Evans has been thrown out of a game in the dome for flattening Lattimore after the Saints top defensive back had been jawing with another Buccaneers player. 49ERS: Star tight end George Kittle missed his second straight game because of a groin injury. Kittle’s injury left San Francisco without two of their best offensive skill position players with running back Elijah Mitchell on injured reserve with a knee injury. SAINTS: Running back Alvin Kamara was scratched from the lineup against the Buccaneers because of a rib injury that has bothered him since Week 1.