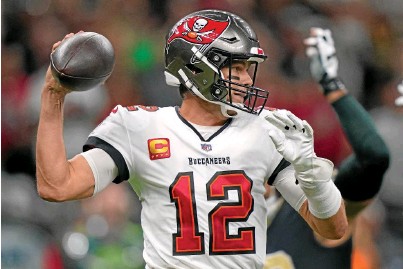 NEW ORLEANS — Tom Brady threw a go-ahead touchdown pass to Breshad Perriman and the Tampa Bay Buccaneers intercepted Jameis Winston three times in the last 12 minutes to beat the New Orleans Saints 20-10 on Sunday. Brady, who had lost four straight regular-season meetings with New Orleans, again struggled for the first three quarters of this latest encounter between NFC South rivals. Brady’s frustration was clear when he was caught on camera throwing a tablet in the bench area. With the game tied at 3-3 in the fourth quarter, Brady marched the Tampa Bay to the Saints’ 28 and then hit Perriman in the back right corner of the end zone to make it 10-3. Jamel Dean then made the first two picks on Winston, followed by Mike Edwards, who put the game away with a 68-yard return down the right sideline for a touchdown. DOLPHINS 42, RAVENS 38: Tua Tagovailoa threw for 469 yards and six touchdowns, four of which came during a spectacular fourth quarter as Miami rallied from a 21-point deficit to beat host Baltimore. Tagovailoa’s 7-yard touchdown pass to Jaylen Waddle with 14 seconds left completed the incredible comeback after the Dolphins trailed 35-14 with under 13 minutes remaining. CARDINALS 29, RAIDERS 23 (OT): Byron Murphy Jr. scooped up Hunter Renfrow’s fumble and returned it 59 yards for a touchdown with 3:51 left in overtime and Arizona rallied from a 20-point deficit in the second half to beat host Las Vegas. QB Kyler Murray scrambled for a 3-yard TD on the final snap of regulation before hitting A.J. Green for the tying 2-point conversion. JAGUARS 24, COLTS 0: Trevor Lawrence threw two touchdown passes to Christian Kirk, and Jacksonville dominated short-handed Indianapolis for its eighth consecutive home victory in the series. The Jaguars sacked Matt Ryan five times, intercepted three of his passes, held reigning NFL rushing champion Jonathan Taylor to 54 yards and notched their eighth shutout in franchise history. The past three shutouts have come against the Colts. BRONCOS 16, TEXANS 9: Russell Wilson won his home debut but he was booed during Denver’s sloppy win over Houston a week after he was jeered in his return to Seattle. Wilson started out just 6-for-20 before leading the Broncos to a touchdown and a field goal to erase a 9-6 deficit. RAMS 31, FALCONS 27: Matthew Stafford threw for 272 yards and three touchdowns, Jalen Ramsey intercepted a potential go-ahead TD pass in the end zone and Los Angeles held off a second-half rally attempt by visiting Atlanta. Marcus Mariota was sacked before he could get a Hail Mary attempt off on the final play. COWBOYS 20, BENGALS 17: Brett Maher kicked a 50-yard field goal as time expired and Dallas pulled out a home victory over Cincinnati after losing a two-touchdown halftime lead. After the Cowboys stopped a Bengals drive with about a minute remaining, quarterback Cooper Rush got Dallas in range to improve to 2-0 as a starter. 49ERS 27, SEAHAWKS 7: Jimmy Garoppolo threw a touchdown pass on his first full drive after replacing an injured Trey Lance and ran for another score to help San Francisco beat visiting Seattle. He completed his first five passes in his first game since last season’s NFC title game. PATRIOTS 17, STEELERS 14: Mac Jones threw for 253 yards and a touchdown and visiting New England beat mistake-prone Pittsburgh to prevent an 0-2 for the first time since 2001. The Steelers’ biggest gaffe came on a muffed punt in the third quarter set up a two-yard TD run by Damien Harris that gave the Patriots an 11-point lead it didn’t relinquish. GIANTS 19, PANTHERS 16: Graham Gano kicked a 56-yard field goal with 3:34 to play as New York beat visiting Carolina to improve to 2-0 for the first time since 2016. The Panthers lost their ninth straight, the longest active streak in the NFL. LIONS 36, COMMANDERS 27: Jared Goff threw two of his four touchdown passes to Amon-Ra St. Brown to lift Detroit over visiting Washington. Aidan Hutchinson had three sacks to help the Lions lead 22-0 at the half. JETS 31, BROWNS 30: Joe Flacco’s 15-yard touchdown pass to rookie Garrett Wilson with 22 seconds left rallied New York to a win at Cleveland, which blew a two-touchdown lead in the final two minutes. Nick Chubb’s third rushing TD of the game put the Browns up by 13 with 1:55 left. PACKERS 27, BEARS 10: Aaron Jones rushed for 132 yards and a touchdown and caught a scoring pass from Aaron Rodgers, who continued his domination of Chicago by leading Green Bay to a home victory. The Packers beat the Bears for a seventh straight time, matching its second-longest win streak in the 205-game history of the NFL’s oldest rivalry.