City2 ties with Kansas City to claim a conference title 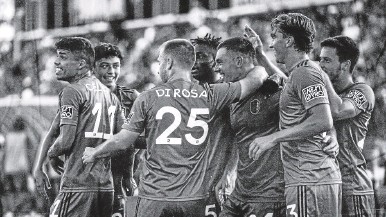 It might not have been the way St. Louis City2 wanted to close its regular season, but it didn’t matter because the team still got what it wanted. City2 tied Sporting Kansas City II 1-1 and then lost in a penalty kick shootout, 5-4, but the one point it got for the game was all it needed when the team it trailed in the standings, Tacoma, lost its match in regulation. That gave City2 the top seed in MLS Next Pro’s Western Conference and home-field advantage for the first two rounds of the playoffs. “We’ll temper my disappointment with the result tonight with the fact that there’s so many good things that will come out of this moment in this game,” City2 coach John Hackworth said. “I mean, that’s huge. We’re Western Conference champions; we’re the No. 1 seed. We don’t get to play the East, so for me, we finished first and that’s a huge accomplishment.” “It’s really special,” said City2 defender Kyle Hiebert, who scored the team’s goal. “We were talking about goals we set at the beginning of the year, and this was a big one. So to accomplish that, that’s the position we want to be in going into the playoffs.” City2 will open the playoffs against North Texas, the developmental team for FC Dallas, sometime this week but the when and the where are very much up in the air. With Centene Stadium still in limbo after an electrical problem forced the team to move its final regular-season game to Southern Illinois University Edwardsville, the club is at the mercy of both stadium repairs and games elsewhere. The club would love it if Centene Stadium were up and running in time for the game, but a venue will have to be determined as early as Monday, which wouldn’t give the team much time. Both SLU’s Hermann Stadium and SIUE’s Korte Stadium have games next Saturday (it’s homecoming for both schools), and SIUE also has a game on Sunday afternoon. The first round of the Next Pro playoffs can start on Friday, so Friday or Sunday look more likely. City2, Tacoma and Houston all finished with 49 points, but the first tiebreaker is regulation wins. City2 had 15 while Tacoma and Houston had 14, so it got the No. 1 seed and finished with the second-best record in the league, behind Eastern Conference champion Columbus, which had 55 points. “I think we deserve this title,” said midfielder Celio Pompeu. “We’re very happy now. We’re a little bit sad because we didn’t win the game, but it happens. Now we’re going even stronger into the playoffs.” City2 is going into the playoffs winless in its final three games and with just two goals. The team once again was without its two strikers, Klauss (injury) and Josh Dolling (red card suspension). Once again, it created a lot of chances but couldn’t finish them. City2 outshot SKC II 23-8 and had nine shots on goal, but only Hiebert’s went in. “It’s hard because we don’t have a true (striker),” Pompeu said, “but we are starting to find solutions to keep winning. It’s hard, but we’re going to be fine . ... The goals are going to come. We definitely need to be more clinical. We’ve been working hard on our finishing extra after practice. But this is the thing that happens. It’s soccer.” “That’s a game we should have won,” Hackworth said. “We just made one mistake and it cost us.” The mistake came in the 63rd minute on a ball played back to defender Selmir Pidro near midfield. He was a bit casual on letting the ball come to him, and when he faced pressure from SKC II’s Josh Koan, his first touch was too strong and he turned the ball over. Koan outran Pidro down the field on a breakaway and then passed to Tijani Fatah for the tap-in goal. That changed the dynamics of the closing minute because while a tie would give City2 first, giving up another goal would drop it to third. But City2 was able to control most of the rest of the game and Hackworth said even nine minutes of stoppage time didn’t bother him because of how well the team was playing. “It’s just one of those soccer games where you walk away with a draw and you’re like: How did that happen?” Hackworth said. City2 took the lead in the 12th minute on Hiebert header off a corner kick from Akil Watts that Hiebert banked in off an SKCII defender. It was the second goal of the season and the second goal in four games for Hiebert, one of the team’s center backs and the one player so far on City2 to have earned a first-team contract for next season. “It’s definitely cool for a moment,” Hiebert said of the title. “We’ll recognize that tonight but then we’ll get back to work Monday because we want to go further than being best in the West. We want to make a run in the playoffs and set the tone there.”