Pandemic homeless hotels close, sending some back to streets 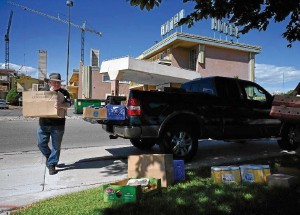 DENVER — As Charlie Gilmore collected his belongings Friday to leave the Denver hotel that had been a home to him and 137 other previously homeless people during the COVID-19 pandemic, he pondered where he would spend the night. The 58-year-old is one of thousands of people without homes across the country who found relief in motel rooms during the pandemic, but are now facing uncertainty as the hotels close, special government funding during the pandemic dwindles and leases come to an end. Cities from Anchorage to New Orleans have ended or are winding down their hotel programs, which offered a good alternative to packed homeless shelters amid the spread of COVID-19. “Somewhere down the road here there’s a bunch of cedars,” said Gilmore, pointing to nearby trees while sitting atop a neon sleeping bag rated for freezing weather as Denver’s winter looms. The Quality Inn in Denver where Gilmore lived was leased from the private owner by the Colorado Coalition for the Homeless. It provided rooms for those over 65-years-old and people at greater risk for severe COVID-19 illness during the pandemic. Opened in April 2020, FEMA funds directed through Denver to the Coalition helped keep the hotel running over the past 2½ years. But the $9 million total spent on the lease and an additional $5 to $6 million in operational costs became unsustainable, said John Parvensky, president and CEO of the Colorado Coalition for the Homeless. “We are kind of in a Catch-22,” said Parvensky, who said case management is still being provided to Quality Inn residents. “It wasn’t designed to be a longterm fix.” Some leaving the Quality Inn in Denver have found permanent housing, others are moving into shelters, some are back on the street, and a few are moving into temporary hotel rooms paid for by Housekeys Action Network Denver, or HAND, which started a GoFundMe page to buy camping gear and fund hotel stays. The Colorado Coalition for the Homeless is also pitching in. As of Sept. 12, only 57 of the inn’s 138 residents had some type of temporary or long-term housing lined up, according to a letter from the Colorado Coalition for the Homeless. Updated numbers from the organization are not yet available. Anjanette Gallegos, 54, who sat in front of the beige Quality Inn on Friday in Denver, was waiting for a Lyft ride to move into a new apartment she had secured, but said leaving the community was bittersweet. Having couch surfed before the pandemic, having her own room was a godsend. “A home’s not a home unless you can call it your own home,” Gallegos said. Brett Sterba, another Quality Inn resident, said he didn’t yet know where he would pitch his tent Friday night, but plans to eventually return to a Denver street corner where he twirls a sign with smiley faces for some cash. “It kind of bums me out,” he said of the hotel’s closure. “I thought it was going really well and it’s too bad they don’t have something more permanent like this.” Terese Howard, an organizer for the Housekeys Action Network Denver, believes that the hotel’s operations should have been extended. The Colorado Coalition for the Homeless has purchased a Denver-area hotel and is in the process of acquiring a second for permanent housing as part of a wider trend across the country — spurred by the success of pandemic-era programs — to convert typically tourist lodgings into long-term options. Donald Whitehead, executive director of the National Coalition for the Homeless, said that while it is sad to see the temporary housing in hotels close, it provided an important blueprint for homeless advocates around the country. “It really taught us a lesson in how we could really address this problem in a way that is comprehensive and fundamental,” he said. In California, Gov. Gavin Newsom’s “Project Homekey” program grew out of what the state called Project Roomkey — an initiative that housed homeless people in hotels up and down the state. “Project Homekey,” which started in June 2020, is turning vacant motels, hotels and other unused properties into permanent supportive housing. The state buys the properties, coverts them and gives them to local governments that then contract with local providers for needed services. Newsom last month announced nearly $700 million from the program for 35 new projects. That brings the total to more than 200 projects projected to create more than 12,500 permanent and interim homes. Newsom said last month that the program “is changing lives across the state” and called it “a model for the nation.” Whitehead and Ann Oliva, CEO of the National Alliance to End Homelessness, said the main barrier to expanding hotel accommodations for the homeless is funding. “I would lay the blame at the feet of the federal government,” said Whitehead. “We are back to business as usual, not providing enough resources for the problems.” Oliva highlighted that the private rooms offered unhoused people security, privacy, and stability, and increased their likelihood of finding permanent housing. “It’s got to be devastating for somebody to have gotten some measure and ability to have stability and some comfort in their lives to be exited from a program like that,” she said. “It’s what we didn’t want to happen.”