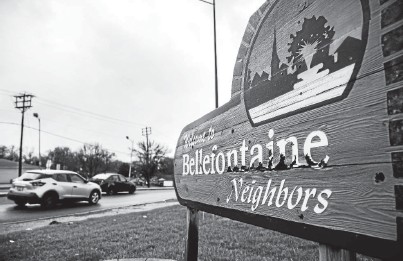 BELLEFONTAINE NEIGHBORS — Two former members of the Bellefontaine Neighbors Board of Aldermen are suing the city to recover monthly stipends they say Mayor Tommie Pierson Sr. improperly withheld as political retribution. Miranda Avant-Elliott and Theresa Reed, who were part of a faction that opposed Pierson and accused him of taking unilateral action on spending without board approval, filed a lawsuit in St. Louis County small claims court. They say Pierson withheld their stipends from December through April, when both left the board after opting not to run for reelection. At stake in the case: $3,750, or $375 for the five months each woman says the city refused to pay. “For me, I feel like it’s a form of stealing,” said Avant-Elliott. It’s not the money that’s the issue for Bellefontaine Neighbors. It hired an attorney, Randall Cahill, to fight the case. His retainer is $5,000, according to a copy of his June 30 contract with the city. He bills $300 per hour. “We don’t want to set a precedent,” Pierson said in an interview. Pierson, who is paid $20,000 to serve as city manager in addition to mayor, said he stopped paying Avant-Elliott, Reed and the two other board members who made up the opposition faction because they boycotted months of meetings to deny the board of aldermen a quorum. “Because of their actions, our city bond ratings went down,” Pierson said. Cahill’s law firm, The Cahill Partnership, donated $500 to Pierson during his 2019 run for Bellefontaine Neighbors. “He has hired another one of his friends as attorney,” AvantElliott said. The retainer is “more than what we would get. Does that even make sense? But if you’re trying to line somebody’s pocket, it makes sense.” Pierson, a pastor at Greater St. Mark Family Church and a former Missouri state representative whose son also served in the Legislature, admits that Cahill is a friend. But he said the city attorney couldn’t take the case because she also represents the board of aldermen and he got a good deal on Cahill. The city didn’t issue a request for proposals for legal services, Pierson said. He didn’t believe it had to. “He was cheaper than anyone else,” Pierson said. Cahill has not yet filed a response in the case, and he didn’t immediately respond to a request for comment. Pierson said the city hasn’t yet received any hourly bills beyond the retainer. Avant-Elliott and Reed, along with two other aldermen, began boycotting some meetings last year to deny the board a quorum. They accused Pierson of ignoring city ordinances — paying bills and making appointments without board authorization. They worried the majority loyal to Pierson would rubber-stamp past actions. The impasse prompted Pierson to ask St. Louis County Prosecuting Attorney Wesley Bell to intervene. An investigator from Bell’s Conviction and Incident Review Unit, a special unit Bell set up during his first year in office to investigate wrongful convictions and police misconduct, contacted Pierson’s political opponents but later closed the investigation. Reed and others said the move looked like a political favor for Pierson and accused Bell’s office of trying to intimidate them. Bell’s office denied it was an intimidation tactic, and Pierson has said he just wanted to try and get the aldermen to come to meetings and determine whether their actions were illegal. For some time earlier this year, the opposition faction held a majority of votes on the board. They did attend meetings then. But then Pierson’s allies left board of aldermen meetings to kill the quorum. Even if you accept Pierson’s rationale for unilaterally withholding their stipends, AvantElliott said she did attend many of the meetings during the time in question. And she asked why Pierson’s allies continued to get paid when they left several meetings. Pierson said his board allies’ absences were excused. “When they needed to leave, they would ask if it was OK for me to allow them to leave the meetings,” Pierson said. “The people that you are referring to never said a word to me about whether they were coming or not coming. They just would not show up.” Another former alderman who was part of the opposition, James Carroll, plans to file his own claim for unpaid alderman stipends. Even after the election, Carroll said didn’t receive his stipend for some months. “He treats it like he can just dismiss ordinances,” said Carroll, who recently resigned to move to Collinsville. “Our salary has been set by ordinance.” Pierson said Carroll is “lying.” “I started paying him as soon as he started coming to meetings,” Pierson said. Avant-Elliott said she spoke to Dorothy White-Coleman, the city attorney, about the issue and Coleman told her there was nothing in the ordinances allowing Pierson to withhold payment. White-Coleman, who Pierson hired as city attorney after he was elected, said she did tell Avant-Elliott that “I did not find a specific ordinance” authorizing the nonpayment. “But I told her the mayor was acting pursuant to his general supervisory authority over the city,” White-Coleman said. A hearing in the case has been set for Nov. 30.