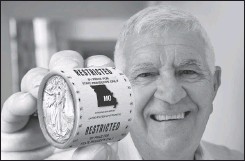 Once Missouri residents got wind that Missouri State Bank Rolls filled with Silver Walking Liberties dating back to the early 1900’s were being handed over, there was a mad dash to get them. That’s because they are the only Bank Rolls known to exist with the exclusive State Restricted Design. “The phones will be ringing off the hook. That’s because everyone will be trying to get them while they still can,” according to officials at the National Mint and Treasury who say they can barely keep up with all the orders. In fact, they had to impose a strict limit of 4 Missouri State Bank Rolls. So, if you get the chance to get your hands on these State Bank Rolls you better hurry because hundreds of Missouri residents already have and you don’t want to miss out. You see, the U.S. Gov’t stopped minting these Silver Walking Liberty Half Dollars in 1947 and there can never be any more which moves them into the collectible coin status. And here’s the best part. The rolls are unsearched so there’s no telling how much they could be worth in collector value. That’s why the state minimum set by National Mint and Treasury of just $39 per Silver Walking Liberty, which is just $585 for the full Bank Roll is a deal too good to pass up. But you better hurry because these Missouri State Bank Rolls themselves have been marked State Restricted by price which means the state minimum set by National Mint and Treasury is restricted to Missouri residents and non-state residents must pay full price if any remain. That’s because they make amazing gifts for children, grandchildren and loved ones. Just imagine the look on their face when you hand them one of the State Bank Rolls — they’ll tell everyone they know what you did for them.