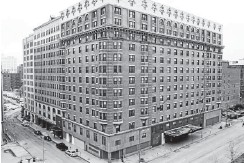 ST. LOUIS — The Mid-America Carpenters Regional Council is suing the company behind the long-delayed redevelopment of downtown’s Jefferson Arms, alleging the developer owes the union $700,000. The union claims Dallas-based Alterra Worldwide defaulted on $700,000 in loans the carpenters’ St. Louis council lent to the company. The money went to pay for 2018, 2019 and 2020 real estate taxes and “pre-development costs” related to Jefferson Arms, according to the lawsuit filed Friday in U.S. District Court in St. Louis. Those loans, plus interest, were due in December of 2021 and July of this year. The union alleges Alterra and its CEO, Mukemmel “Mike” Sarimsakci, have yet to repay the loans. Sarimsakci did not respond to a request for comment. The loans were issued before the Chicago-based Mid-America Carpenters Regional Council dissolved the St. Louis office and sued the former leader, Al Bond, over allegations of financial misdeeds related to billboard advertising. Bond called the decision to have the Chicago council oversee St. Louis “nothing more than a political coup d’etat.” Alterra stepped forward around 2017 with plans to turn the 500,000-squarefoot, historic Jefferson Arms, which has sat vacant since 2006, into a hotel and apartments. The city of St. Louis agreed to issue $17.3 million in tax increment financing to help Alterra in its redevelopment. But financing issues have plagued Alterra since. The carpenters’ St. Louis office also had spent years fighting Alterra over concerns the developer would not use union labor. The St. Louis council announced in late 2020 — a few months before it issued the first of two loans to the developer — that it had reached an agreement with Alterra. Little work has occurred over the years at the property, 415 North Tucker Boulevard, until recently when the city granted Alterra a $350,000 building permit.